As you may have read, we went over to Rhodes on Friday to get our annual health checks done. We now do this under a private insurance scheme with AXA (and more about that later in the week) where previously, we used to do it on our own. Blood tests, chest x-ray and cardiogram, and for Neil, another test which you have to have done every five years if you work with food and drink. The day starts with the boat across to Rhodes, and the Friday boat is always popular. That’s mainly because the timing is better as it leaves at 8.20 in the morning rather than 5.05 – or similar times. Knowing that the boat would be busy and thus possibly a crush for taxis at the other end, I booked a taxi via Rodos Taxi online a few days before we were due to go. The boat was slightly late coming in, and where our arrival time was meant to be 9.20, we didn’t dock until around 9.45…

We were heading to Euromedica to meet our insurance agent, get our tests done and then have the rest of the day free, and we poured from the boat among the crowd of day visitors from Symi, Tilos and other islands, the soldiers heading home or to other islands (the ferry goes on to Kastalorizo), the lorries and cars, and looked for anyone holding a card or iPad with our name on it. I wasn’t sure what the taxi courtesy waiting time was, but by the time we had looked around, and the crowd and other taxis had started to thin out, we still hadn’t found him/her. Assuming we had missed it because we were late, and being in a rush, we hailed another cab, and as we set off, I emailed the taxi firm to tell them, just in case our driver was still hanging around and waiting. I didn’t mind paying again, I could sort that out later, but I didn’t want the poor chap/chapess waiting there all morning in vain. Just after leaving the harbour entrance, my phone rang… 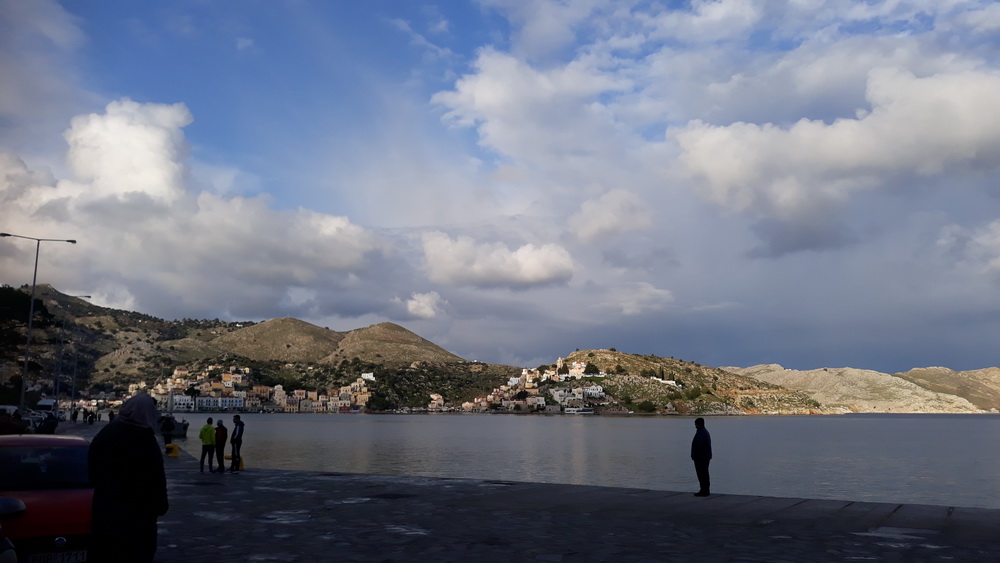 It was our driver asking if we had taken another taxi, and I said yes because we thought we’d missed him as we were late. He apologised, saying he was stuck behind a bus and couldn’t get to us, but assumed we were the people in taxi number 41. He also said he was following us, and could we stop? I handed my phone to our driver, they had a conversation, and our taxi pulled over. The original one dew up behind and the two drivers had a quick chat before our original driver again apologised for missing us and paid the new driver the money we had paid the company when pre-booking. That done, we set off to Euromedica in the non-booked cab, and all was well. I emailed the company directly to let them know and thanked them for the service. I mean, chasing another cab to pay another driver, so we didn’t lose our money was going the extra mile (literally) for one’s customers, and I thought it was rather decent of them.

I mention that as I’ve used https://www.rodos-taxi.com/ before and will use them again and if you’re travelling at busy times, or have a quick connection to make between boat and airport, then you might find that link useful. Btw; the return journey cost the same as the outward one, but you do pay a couple of Euros extra for booking online in advance, as you would if you rang a cab from a hotel.

Category: Day to day on Symi

Part memoir, part observation, this scrapbook of anecdotes and witty observations takes us from Romney Marsh to Symi, Greece via all kinds of interesting places, unusual situations, words and nonsense.

“The book combines closely observed details of real life on the island with handy tips and hints about dealing with Greek bureaucracy, medical concerns and the dangers of having a beer on the way up the steps, of which there are many.” Amazon review Order online now

Carry on up the Kali Strata

“This is a good laugh out loud honest account of life on a small island. Highly entertaining and very honest. Wonderful, I recommend this for any greekophile.” Amazon review Order online now

“A diary over a year on living on a Greek island which is entertaining and informative, with wonderful black and white photographs.” “This book gave a very good account of living on the beautiful island of Symi. It was also informative and in parts very funny.” Amazon reviews Order online now

“This is Dan Brown meets Whitehall Farce with a bit of education about Symi's history thrown in for good measure. Set on the Greek island of Symi, it's a fast paced whodunnit with lots of laughs and loads of page turning moments. Yes, it was hard to put down.” Amazon review Order online now

A new mystery thriller by James Collins, set on the mysterious Romney Marshes. Available in paperback and on Kindle.

“There are more plays on words and double-entendres than a Carry On film or a seaside postcard. It had me smiling, giggling and laughing out loud - a real feel good story. But the novel also addresses overcoming small-mindedness and takes an excellent swipe at the media and their unhealthy influence. If you want to read a very clever plot and enjoy some very intelligent word play then buy Remotely - you will not be disappointed. ” Amazon reviews Order online now

“Brilliant storyline. It hooked me from the first page and I didn't put it down until I finished and then only reluctantly. It had everything the more traditional thriller should.” Amazon review Order online now

You can find out more about which cookies we are using or switch them off in settings.

This website uses cookies so that we can provide you with the best user experience possible. Cookie information is stored in your browser and performs functions such as recognising you when you return to our website and helping our team to understand which sections of the website you find most interesting and useful.

You can adjust all of your cookie settings by navigating the tabs on the left hand side.

Strictly Necessary Cookie should be enabled at all times so that we can save your preferences for cookie settings.

If you disable this cookie, we will not be able to save your preferences. This means that every time you visit this website you will need to enable or disable cookies again.