I could fill a whole page or two with photos from the Acropolis museum and our second day in Athens, but I will try and limit myself. The day, a Sunday, started with a short walk up to the parliament building at Syntagma to watch the Evzones, the presidential guards. “The Evzones or Evzonoi, is the name of several historical elite light infantry and mountain units of the Greek Army. Today, it refers to the members of the Presidential Guard, a ceremonial unit that guards the Greek Tomb of the Unknown Soldier and the Presidential Mansion in Athens.” [Wikipedia] We were there to see them in their hourly duties, but at 11.00 on a Sunday, they also perform the changing of the guard in a more intricate ceremony. 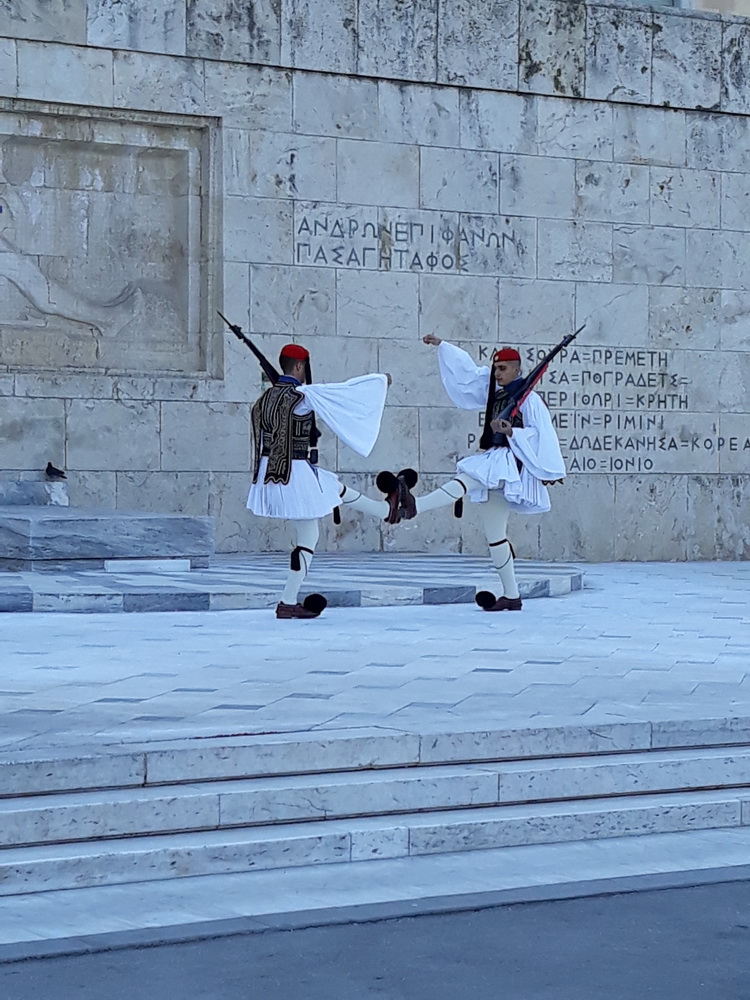 By that time, however, we had taken the metro up to the Acropolis museum. The metro, as I’ve said before, is clean, punctual and not expensive. The display pictured below, for example, was at the museum station. There are uncovered ancient ruins in the concourse at Monastiraki station.

The museum itself (€10.00 entry) is large, well designed and full of history of the Acropolis and Parthenon including a life-size freeze from around the top of that building, discovered artefacts, models showing the development of the area, pottery and even uncovered archaeology still beneath the site. There is a café for a pit stop and a video display where you can sit and rest for ten minutes and watch the history of the place. You’re able to see the Acropolis from the windows. It was still windy outside, so we didn’t venture up to the summit itself, but if you’re planning to do that, or visit the museum, my advice is to go early. We walked straight in, but by the time we left, there was a huge queue. 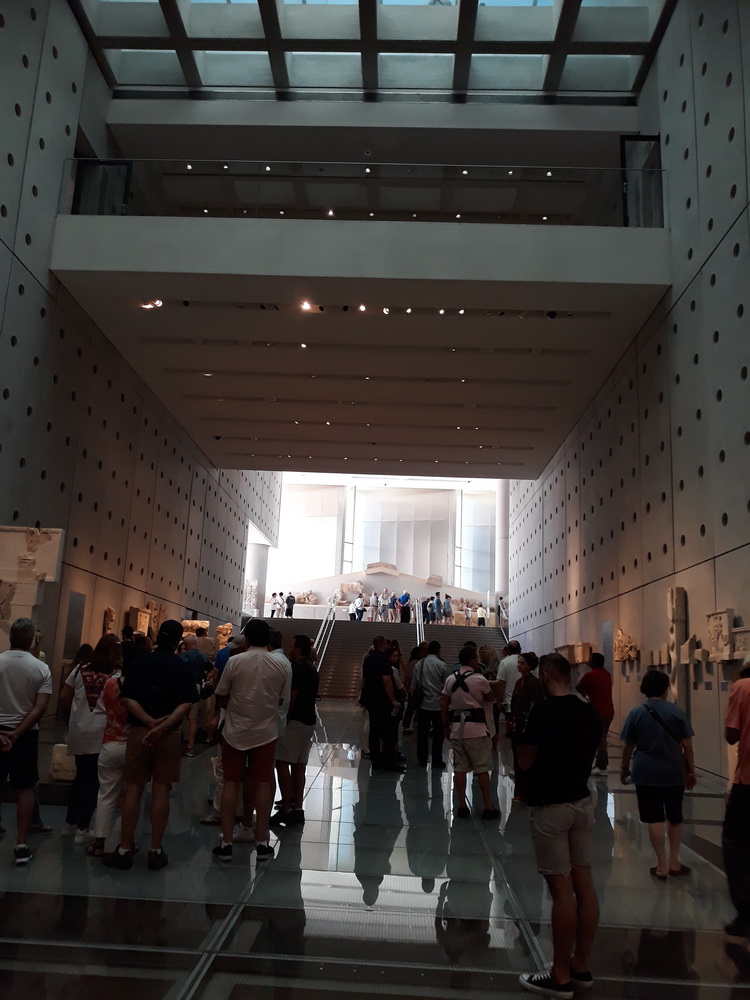 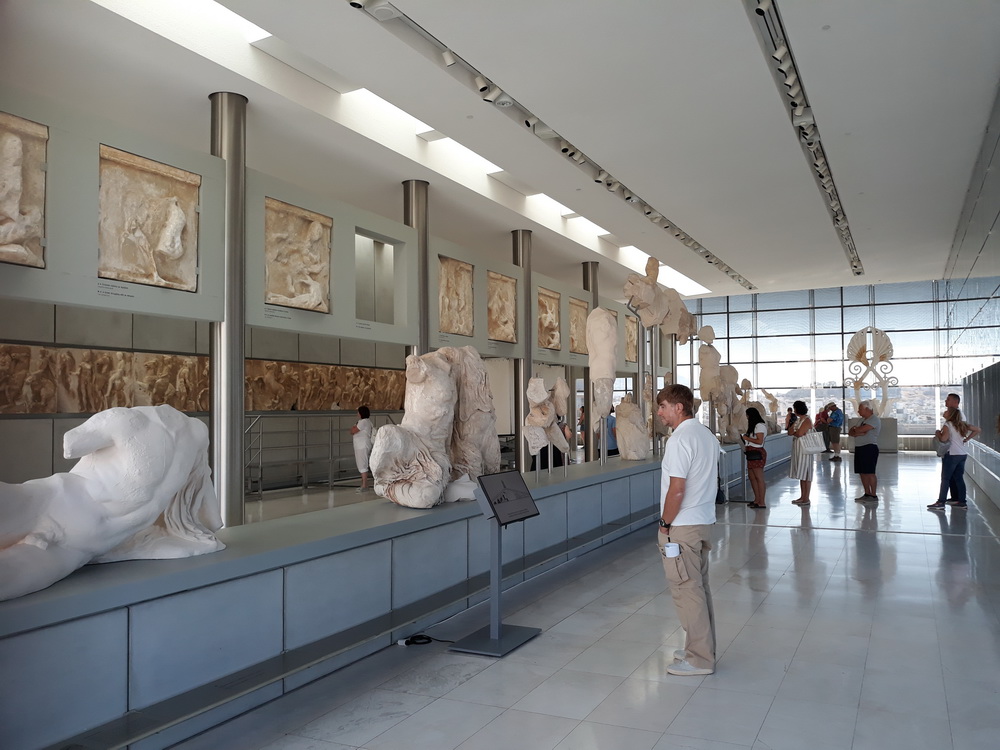 After that, we took a walk through Plaka, had lunch and headed back to the hotel for a siesta. Later in the afternoon, we wandered down through Monastiraki and onwards to Thiseio (or Thissio), a neighbourhood bordering the ancient agora at the foot of the Acropolis, and one of my favourite areas in the city. As it was (still) Sunday, the ‘boot fair’ style street market was there, although there are craft and other stalls lining the main pedestrian street every day, and so we spent some time wandering the stalls and checking out everything from antiques to tat and from homemade jewellery to homemade leather-bound notebooks (I resisted as I already have four). 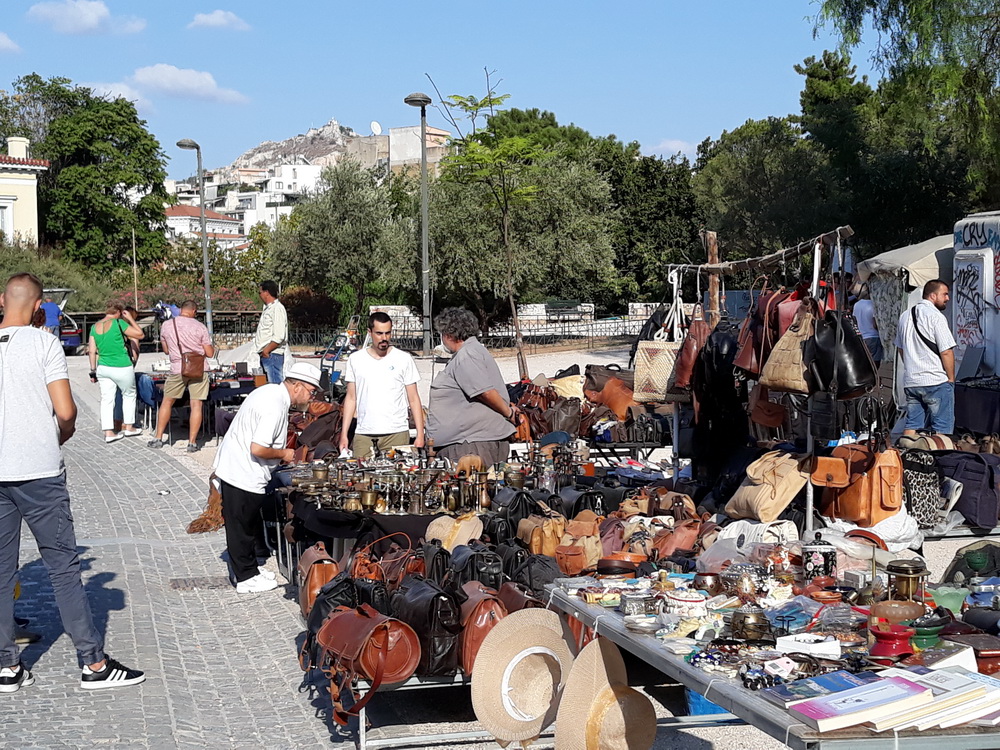 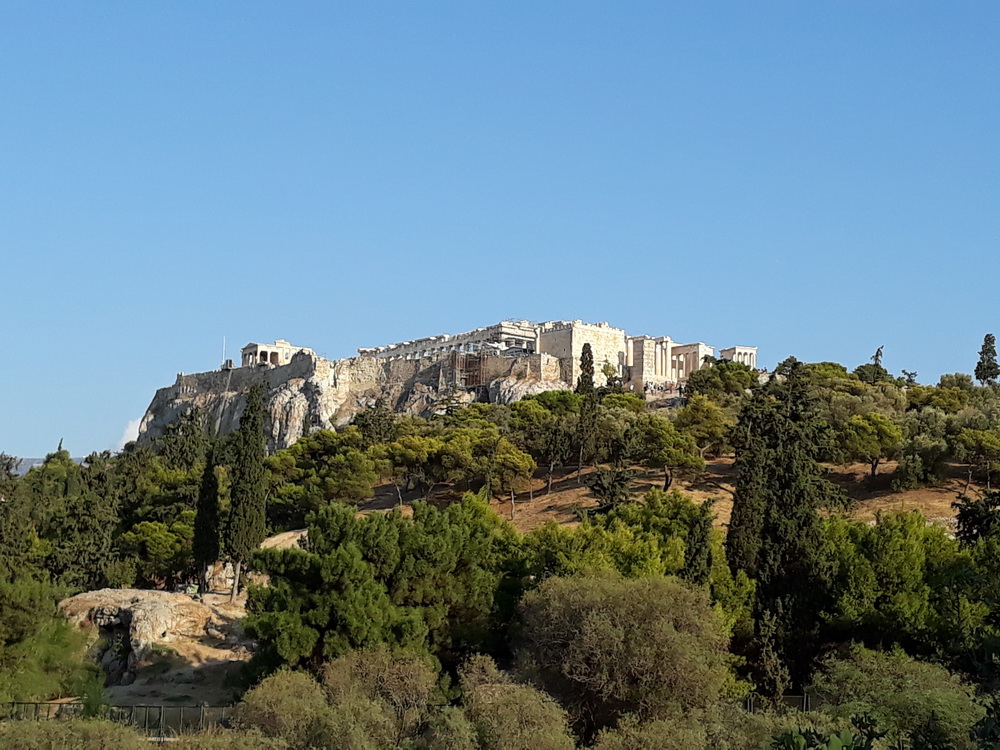 The walk continued until, before we knew it, we were back at the museum and halfway through a circular route which took us back through the Plaka towards Monastiraki and dinner. We walked six miles that day and ended up at a taverna that was very pleasant, not costly and looked awfully smart. It was all going well until the hostess, Irini, began her nightly routine of teaching everyone ‘kaliiiispeeeera’ and so on, and insisted those punters who wanted to, got up to dance Zorba, including the smashing of ‘plaaaayts’ as two very talented musicians played and sang. It was good fun, though we stayed rooted in our chairs.

You can have a bit of everything in Athens all in one day. 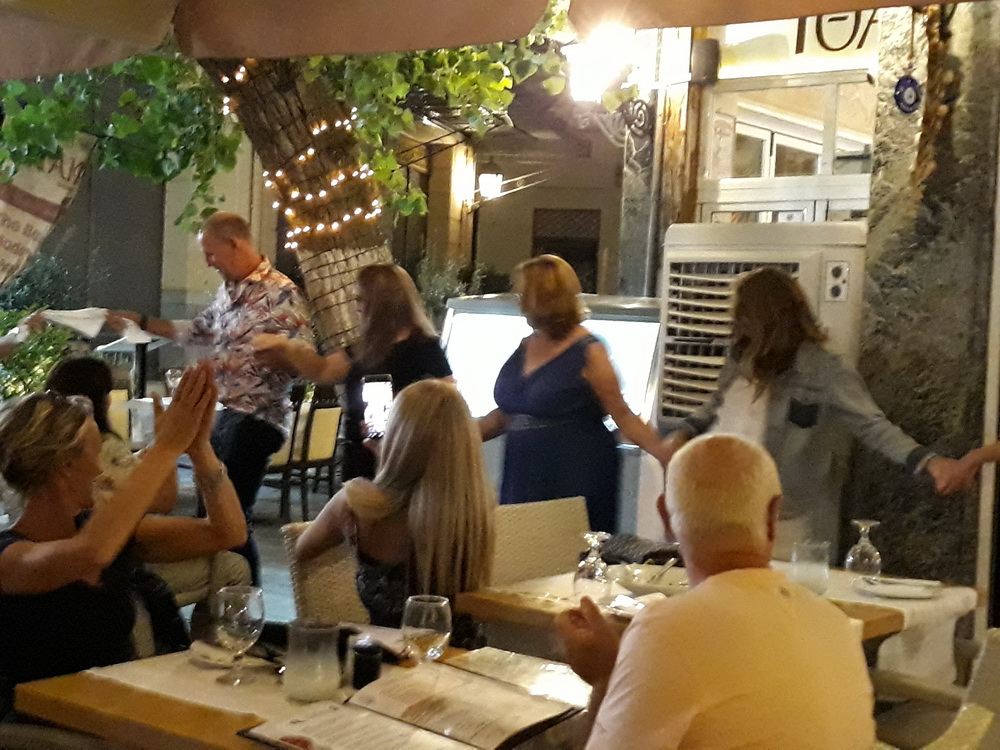 Category: Day to day on Symi

Part memoir, part observation, this scrapbook of anecdotes and witty observations takes us from Romney Marsh to Symi, Greece via all kinds of interesting places, unusual situations, words and nonsense.

“The book combines closely observed details of real life on the island with handy tips and hints about dealing with Greek bureaucracy, medical concerns and the dangers of having a beer on the way up the steps, of which there are many.” Amazon review Order online now

Carry on up the Kali Strata

“This is a good laugh out loud honest account of life on a small island. Highly entertaining and very honest. Wonderful, I recommend this for any greekophile.” Amazon review Order online now

“A diary over a year on living on a Greek island which is entertaining and informative, with wonderful black and white photographs.” “This book gave a very good account of living on the beautiful island of Symi. It was also informative and in parts very funny.” Amazon reviews Order online now

“This is Dan Brown meets Whitehall Farce with a bit of education about Symi's history thrown in for good measure. Set on the Greek island of Symi, it's a fast paced whodunnit with lots of laughs and loads of page turning moments. Yes, it was hard to put down.” Amazon review Order online now

A new mystery thriller by James Collins, set on the mysterious Romney Marshes. Available in paperback and on Kindle.

“There are more plays on words and double-entendres than a Carry On film or a seaside postcard. It had me smiling, giggling and laughing out loud - a real feel good story. But the novel also addresses overcoming small-mindedness and takes an excellent swipe at the media and their unhealthy influence. If you want to read a very clever plot and enjoy some very intelligent word play then buy Remotely - you will not be disappointed. ” Amazon reviews Order online now

“Brilliant storyline. It hooked me from the first page and I didn't put it down until I finished and then only reluctantly. It had everything the more traditional thriller should.” Amazon review Order online now

You can find out more about which cookies we are using or switch them off in settings.

This website uses cookies so that we can provide you with the best user experience possible. Cookie information is stored in your browser and performs functions such as recognising you when you return to our website and helping our team to understand which sections of the website you find most interesting and useful.

You can adjust all of your cookie settings by navigating the tabs on the left hand side.

Strictly Necessary Cookie should be enabled at all times so that we can save your preferences for cookie settings.

If you disable this cookie, we will not be able to save your preferences. This means that every time you visit this website you will need to enable or disable cookies again.